On Thursday, I took my motorcycle to the shop to get a new battery and brakes. I also needed new tires so I got those as well as a battery tender. Since this is my 3rd battery for this bike.

I didn't go anywhere on Friday or Saturday, so the first opportunity that I had to go for a ride was Sunday. I couldn't find my ear plugs, so the first stop was to Rite-Aid. From there I decided to just, "go". I packed the camera for when I stop or see something worth photographing. 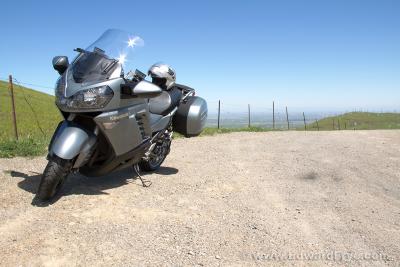 At what I've been told is "Top of the world" on Patterson Pass road. I stopped and took several images, including one set of 25 images that compose a single panoramic image.

From here, I went down to "Cross" road, over to Tesla, then north to Mines Road.

I followed Mines road south to "The Junction" at the point at where Mines road intersects with Del Puerto Canyon Rd and San Antonio Valley Rd.

This is a fairly popular place to have lunch for the riders in the East Bay.

Along the way, I saw this bulldozer which I thought was really cool just sitting in this field all by itself, sure there is a house near by, but

I ate lunch out at the Junction, had a Linguiça sandwich. It was pretty good. There was a group of three or four cruiser rider couples who wanted their picture taken so I obliged, using their camera.

After eating, I continued my trek up to the top of Mount Hamilton. On my way up, I decided to stop and take some more photos. I took another panoramic sequence and tried to capture a couple of riders coming up the hill. I didn't have the camera settings quite right so most of them are blurry due to camera shake. I really wanted to get some motion blur in these, but I guess I got too much.

After making it down the mountain into San Jose, I decided to meet up with a friend for dinner.

Although we didn't make it to dinner, we still had a good time.

I was thinking of taking more curvy roads home, but it was getting dark and my rear was starting to hurt.

As for my problems with the brakes, tires, or whatever it was, they are all gone. The ride was amazing, the bike, smooth as butter again. The guys from Jorge's in Stockton, aces